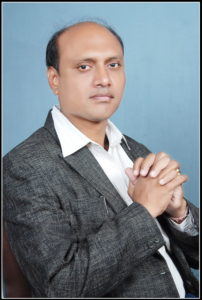 Prof. Ganesh Hingmire is a renowned Intellectual Property (IP) Enthusiast and a winner of two Consecutive National Intellectual Property Awards in 2015 & 2016 given by the Ministry of Commerce, Gov. of India.
Prof. Ganesh completed his LL.M. from the UK after completing LL.B. from renowned ILS Law College, Pune after his Science degree in Chemistry. He has also completed M.Phil (Economics) from the University of Pune with a record of 91% grade point. He has completed several Professional Trainings viz. Japan Patent Office, Indian Institute of Foreign Trade, Indian Institute of Technology, Kanpur and NISCAIR. He constantly supported various industries for their IPR registration and commercialization since 2002. He is a visiting faculty to most prestigious academic institutions in India and delivered more than 1000 sessions in different States including IIT’s and National Law Schools.

He is the founder of Great Mission Group Consultancy which is dedicated towards the promotion and protection of IPR in the country. He is also the founder and director of GMGC IPR Services Pvt. Ltd., a Start-Up recognized by the Government of India under the Start-Up India Scheme launched in 2016.
He is an ardent reader and passionate writer with more than 200 published articles and numerous news articles in all majorly circulated newspapers of Maharashtra and India. He has also authored two books on Economics and Intellectual Property Rights. Manuscript of two more books is under preparation.
He has been interviewed by the majority of the news channels in Maharashtra recognizing his work and he has most efficiently utilized the platform to reach out to farmers and aspirants and make them aware of Intellectual Property Rights. He has also started a YouTube channel to widen his reach to make common man aware of IPRs!
Indian Institute of Technology, Kharagpur invited him to chair the session and inaugurate the Patents and Geographical Indications Drive program in 2016. His organization has Memorandum of Understanding (MoUs) signed with many renowned colleges, institutions, and Universities in Maharashtra for the academic promotion of IPRs.
He has attended six Ministerial Conferences of World Trade Organization (WTO) at Cancun (2003), Hong Kong (2005), Geneva (2011), Indonesia (2013), Kenya (2015) and Argentina

(2017) and his three position papers on GI issues have been published at WTO Website. He chose to work in the area of community IP Rights i.e. Geographical Indications and make it a tool for the economic growth of India. He worked as an expert for the International project called “A Tale of G.I. in India” supported by the European Union and Government of India. He has worked 30 G.I’s out of which 26 are registered. His contribution to registering Agricultural G.I is more than 25% of total Agricultural G.I. registered in India. It is because of his genuine efforts and relentless hard work, Maharashtra is top in the list of Agricultural GIs in India. He continues his work with only one thing in mind “Miles To Go Before I Sleep”. Being the trailblazer in the field of Intellectual Property and particularly in the area of community IP Rights, Ganesh has an incalculable level of understanding and experience regarding building a business out of an innovative concept.